Sola has been deliciously quenching your thirst for nearly 20 years. Sola has become the country’s favorite iced tea. Using only the finest natural fruit flavors and real tea leaves, Sola continues to deliver the best tasting iced tea to quench your thirst.

It took us almost two years of product development to perfect a recipe that we believe is a true representation of the original recipe of iced tea and what we think iced tea drinkers would really enjoy.

During the 1904 St. Louis World’s Fair, trade exhibitors from around the world brought their products to America’s first World’s Fair. An exhibitor named Richard Blechynden, a tea plantation owner planned to give away free samples of hot tea to fair visitors. Unfortunately for Richard Blechynden, a heat wave hit the area and very few visitors wanted hot tea during the fair. To save his investment of time and travel, he dumped a load of ice into the brewed tea and served the first iced tea. The concoction was a hit and iced tea was born.

The history of tea began in ancient China over 5,000 years ago. According to legend, Shen Nung, an early emperor who was a scientist and patron of the arts, mandated that all drinking water be boiled as a hygienic precaution. One summer day while resting after a long journey, his servants began to boil water for the entourage to drink. Dried leaves from a bush accidentally fell into the boiling water. As a scientist, the Emperor was interested in the new liquid, drank some, and found it very refreshing. And so, according to legend, tea was created.

Sola iced tea comes from a company that is passionate in its quest for healthier alternatives to quench your thirst. We don’t believe we need expensive ads or a superstar endorsement to give you a truly delicious and refreshing drink; only a commitment to create special beverages of unparalleled quality for everyone to enjoy.

Sola is a ready to drink, non-carbonated and non-alcoholic beverage. Sola Iced Tea is all natural and real brewed using only the finest ingredients. No artificial preservatives, colors and flavors are used in the production of Sola.

Sola is pasteurized and vacuum packed in a durable 473-ml glass bottle. It incorporates a safety metal cap that pops up when the original seal is broken.

The water used in the production of SOLA undergoes a treatment called Reverse Osmosis. Reverse Osmosis is one of the best methods known today to purify water. 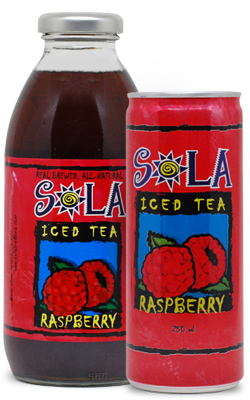 Don’t tell the others but Sola Apple Iced Tea is the apple of my eye. Plenty to sip in a bottle but I’m not willing to share. Ingredients: Water, Sugar, Black Tea, Apple Flavor, Malic Acid.

Sola Iced Tea, Lemon and Raspberry, is now also available in 250ml ALL ALUMINUM cans. Our solo size cans is the perfect size to carry around. We chose to offer a can version because aluminum is one of the most recyclable materials, reducing our carbon footprint even more.

WHAT IS BLACK TEA?

All tea comes from the leaves of one plant, Camellia sinensis, which is processed into four tea types: White, Green, Oolong and Black.

Regional conditions in the various tea-growing area of the world determine a tea’s profile, and one tea type can be quite different from another of its type in color, body, flavor and aroma.

In the case of Black Teas, the differences are noted in the names, which often are taken from the districts in the countries where they are grown. Variations include such names as Assam (India), Ceylon (Sri Lanka) and Yunnan (China).

For all four teas, the main point differentiating them comes from processing. After being picked from the Camellia sinensis plant, both White and Green Teas remain as unoxidized teas, Oolong Tea is partially oxidized, and Black Tea is fully oxidized. Oxidation occurs when enzymes in the tea leaves are released and the leaf responds to the oxygen in the environment, causing the leaves to turn a bright copper color.

Basically, processing gives Black Teas a more full-bodied and robust taste and Green Teas a more delicate, fresh taste, while Oolong Teas fall somewhere in between. Since only the tips are used and the processing is minimal, White Tea has the most delicate flavor of all.

Tea is among the richest natural sources of antioxidants, which have been linked with cancer prevention, decreased risk of stroke, and reduced blood cholesterol. Additionally, it has trace amounts of various nutrients such as the amino acid theanine; the minerals calcium, magnesium, manganese and potassium; and the vitamins C and K.

Naturally occurring antioxidants are nutrients found in most plants, including fruits and vegetables. They bind free radicals and peroxides–both of which are oxygen-containing molecules in your body that, if left unchecked, can damage your DNA, cell membranes and other cell components. The process of breaking down food for energy creates free radicals and peroxides in your body everyday. Antioxidants help your body keep these harmful substances in check

“Black Tea has been used throughout history for medical purposes, long before it became a breakfast tea. It helps relieve diarrhea, lowers cholesterol levels and helps prevent tooth decay. The tea has a therapeutic effect on gastric and intestinal illness because of its tannins, which decrease intestinal activity and exerts and antidiarrheal effect.” (1)

“Scientists have found that tea contains antioxidants, substances that can reduce oxidative damage in the body, helping maintain healthy cells and tissues. The latest epidemiological research suggests that drinking black tea may reduce the risk of cardiovascular disease. Of particular interest are two studies that were published in 1999.” (2)

“One study examined 340 men and women who had suffered heart attack and found that those who drank a cup or more of black tea daily had a 44% reduction in heart attack risk compared to non-tea drinkers. The study was conducted by Dr. Howard Sesso et al. At Brigham and Women’s Hospital and Harvard Medical School in Boston and published in the American Journal of Epidemiology in January.” (3)

“In a separate study of Dutch researchers, participants who drank one cup of black tea daily has a 46% lower risk of aortic atherosclerosis, one factor contributing to cardiovascular disease. Those who drank more than four cups of tea a day had a 69% lower risk. The study, published in October in the Archives of Internal Medicine, examined the association of tea intake and the severity of aortic atherosclerosis in 3,454 subjects who were free of cardiovascular disease at the time of baseline” (4)

“Earlier epidemiological and laboratory studies suggest a relationship between tea consumption and reduced risk of several types of cancer, including oral, digestive, lung and colorectal, and the tea has a greater antioxidant power in vitro than many fruits and vegetables.” (5)

“Studies have shown that drinking black tea lowers your risk of suffering heart disease or a stroke. Now new research offers an explanation for this benefit. Black tea may help blood vessels that have loose elasticity by restoring the vessels’ ability to expand when the pulse rate quickens. So that morning jog is less likely to give you a heart attack.”(6)

Where to find Sola?